I suppose it’s close enough to the show that I should let those interested know where I’ll be this year. From Tuesday through Thursday, I’ll be presenting a Macworld “Supersession” entitled “The Ultimate Mac Starter Class.” If you’re a reader of this site, you’re way overqualified to attend, but please pass the word on to anyone new to the Mac who might benefit from a little “compressed experience.”

On Wednesday night, I’ll be performing in the Macworld All-Star Band at “Cirque du Mac” at an undisclosed location. The party is free, but invitation only. Like the Mac The Knife parties it replaced, “if you have to ask about it, you can’t go.” Unless you see me, that is. I’ll have a limited number of tickets to hand out to people who are especially nice.

On Thursday night, I’ll be stopping by the “Mac Mingle 2009” party, at Jillian’s on 4th St. Host/Mac speaker and author Deb Shadovitz was nice enough to invite me and silly enough to think I was worth including on the list of “Mac Celebs” who are attending. If you see me there, please say hi.

Finally, it’s likely I’ll be participating in some MacJury panel discussions that are slated to take place during the show.

If you’re interested, you can check here for updates and additions.

Chuck Joiner managed to get the entire band together for an interview as part of his “Road to Macworld” series for the MacVoices podcast. To say it was a blast would be an understatement: this is something we’ve never done before and it was an incredibly fun session. I sure hope that comes across in the recording. We’re also giving away six pairs of tickets to sharp-eared listeners. I suspect they’ll all be gone by the time you read this, but hey — it’s worth a shot.

Thanks to Chuck and the band — Chris Breen, Paul Kent, Dave Hamilton, Bob LeVitus, Duane Straub and Bryan Chaffin — for a great time. It’s a genuine joy to be part of this group. It’s amazing. Even without the benefit of iCal or blogs, the ancient Mayans managed to come within a hair’s breadth of correctly predicting the end of the world.

It came not in December of 2012 as they calculated, but a mere four years and one week earlier. Tuesday, in fact, when Apple announced that Steve Jobs would not deliver the keynote speech at the 2009 Macworld Conference and Expo, and that the conference would be Apple’s last as a participant.

Amidst the great wailing and gnashing of teeth came predictions across the Mac web that the Expo was doomed.

And maybe it is.

It’s certainly the end of an era, but things like the Internet and a couple hundred retail stores will do that to a tech conference. Whereas Macworld was the biggest megaphone around a decade or so ago, Apple has made a point since it opened its first round of stores that it got “Macworlds worth” of traffic through its retail outlets — first in weeks, then in mere days. The resurgence in popularity of Apple means the company can generate keynote-like attention at will — and on its own schedule. If Apple had waited until next month’s keynote to unveil its new line of laptops, do you know how many of them it would have sold during the Holiday shopping season? That’s right: none.

Apple is not fond of giving up control of anything, but for years, it had to where the calendar was concerned. It had to wait until Expo to introduce new products (or rush them to market before they were ready) and if it didn’t, the company risked the wrath of the press and rumor-mongers who would immediately deride the event as a disappointment.

Even if the move makes sense from a business perspective (and I don’t disagree that it does), the timing couldn’t have been worse if it had been intentional — and there are those who would say it was. I agree with Daring Fireball’s John Gruber that Apple needed to make both announcements at the same time. If they had simply said Jobs wasn’t delivering the keynote with the intention of dropping the other shoe after the show, the reaction would surely be that Jobs’ health was the issue. But would it have killed Jobs to deliver one more keynote — especially at the 25th anniversary of the conference?

I think the answer to that one can be seen in the special attention — or rather lack of it — that Apple paid to the 20th anniversary of the Macintosh. During that keynote, Jobs replayed the famous “1984” Superbowl commerical in which Apple introduced the Mac. But even then, the gesture was not a look back, but a look ahead, in which the sledgehammer-slinging runner was digitally altered so she was wearing an iPod.

Maybe there was some kind of message to IDG in the announcements; maybe it was payback for some past slight, whether perceived or real. But my guess is that Apple simply works on its own schedule, for its own benefit — and if IDG or the other developers that exhibit at the show are impacted, well, that’s life.

So what happens to Macworld now? The easy example to cite is what happened to the summer show, when Apple pulled out of the Expo after IDG decided to move it from New York back to Boston. That event withered quickly then died. Is that the destiny in store for Macworld San Francisco? Certainly not if Paul Kent, the IDG executive in charge of the conference has anything to say about it.

Under Mr. Kent’s leadership, the event has grown dramatically over the past several years, both in size and quality. And while I’m sure he and his team don’t look at this as good news, I’d be very surprised if someone hasn’t already unlocked a secret drawer somewhere they hoped they’d never need to open and pulled out plans that have long been in place for just this situation.

The real shame in this is that in a perfect world, Apple’s absence shouldn’t affect the show very much at all. The conferences are just as valuable, the exhibitors just as compelling. All Apple has ever really offered to Expo attendees is the promise of new product announcements, the possibility of “just one more thing” and a place to display them, if you could work your way through the crowds. If anything, Apple’s absence gives other developers a better chance to grab some attention, if — and this is a very big, make-it-or-break-it if — IDG can convince attendees that a Macworld without Apple is still something worth coming to.

More likely, Macworld will have to morph into something else — probably something smaller, maybe even something mobile. In the long run, that may be a good thing, but it’s going to be an enormous challenge.

The good thing about an end of an era is that it usually means another one is beginning. Like it or not, Apple has ended the era of Macworld as it’s been. Now it’s up to IDG to define what Macworld will become.

[You can also now find this article on The Mac Observer website.] 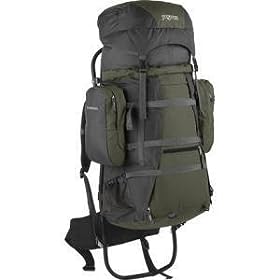 I love camping and I do it whenever I can — usually between 15-20 nights per year. And while most of the hiking/camping community has been moving to internal frame backpacks, I remain an external guy. They’re easier to pack (and more forgiving when you do it “wrong”), better for hiking on well-established trails and much cheaper. But for all their benefits, they’ve become harder and harder to find. So I was very happy to find one of the best external packs around — the Jansport Carson — available once again after a long absence on Amazon.com.

To celebrate and get the word out, I’m posting the link below. Note that the RandomMaccess affiliate ID is embedded in the link. If you buy it through this link, I’ll get a small kickback, and your price remains unchanged.

Now get out there and do some camping!